skip to main | skip to sidebar

It's going to sound like I'm bragging but I'm not. I just have to preface this post with a little information that most of you know, but some of you don't.
I have played tennis my whole life. I started when I was in the single digits and began playing tournaments when I was around 10-11. I moved up in the ranks when I was around 13-14. I played tournaments about twice a month, took lessons 2-3 times a week. Played super-champ tournaments in 14's, 16's and 18's. I got a scholarship to play tennis at ACU but then was totally burned out and injured and I quit.

Last week I had a student in my room for detention and he was telling me that he was in the PE tennis class and asked why I didn't coach the competitive team anymore. I told him it was because I was in grad school and needed to have more time to devote to that. He then replied "Oh, I can't really see you as a coach anyway." So I said "Well, I've played tennis for a long time so I guess I know a thing or two about it." He then said "I just can't really see you running around much. I can't picture you on the court hitting a ball." To which I wanted to reply "Wanna go right now? I will school you!" But I didn't. I just said "Really?" He said "Yeah. You don't look like a tennis player. I think you look more like a bowler."

A bowler...who looks like a bowler? Now, this did come from an 8th grader so I took it with a grain of salt but really? A bowler? Who says that? If you aren't a teacher or you have never taught in middle school then you might not realize that these kids don't have very good social skills and they will be brutally honest with you about pretty much everything.

Like my first year of teaching when the kids asked me how old I was and I told them to guess. Never do that. You don't want to know what they think.

So I could take this one of two ways. Either be bitter and try to prove my tennis skills or embrace my bowler appearance and hit the lanes to brush up on my curve ball. Is that what you call it? You know, when you throw the ball down the lane thingy and it goes straight for awhile and then curves and smacks all the pins down. Yeah, I think this is going to be good.

I think I can make it...I hope. Only 4 more days until Thanksgiving break. I know that God built in Thanksgiving and Spring Breaks just for teachers. If they weren't there, there would be lots of injured children this time of year!
We had lots of fun in A-town this weekend. Here are a few pictures of the Thomesen Thanksgiving. Next week we will celebrate the Ware Thanksgiving. Having two Thanksgivings is good. 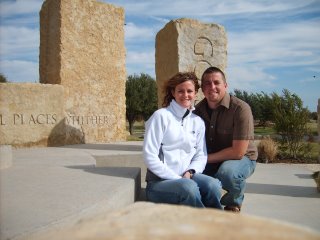 Me and Ryan at the cool new art thing at ACU. It is amazing!!! Go see it if you are in Abilene soon. 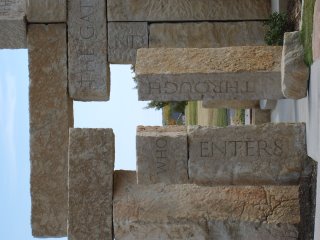 When you look at the sculpture from a certain angle it makes a cross. 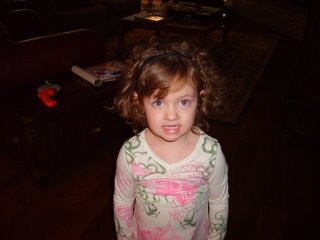 Laine with curly hair. So cute! 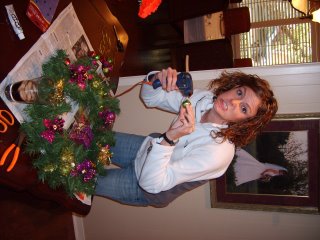 I was being crafty and making a wreath. It is so gaudy that it is cute! I found all the stuff at Wal-Mart for 97 cents. 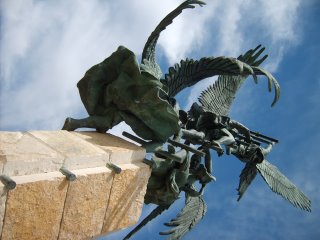 The angels climbing up the ladder in Jacob's dream.

I've had a pretty uneventful week...plus, it's hard to follow the cat pee story. We are going to A-town tomorrow for "Thanksgiving" with my family. I am excited to get out of town so I don't have to look at the laundry piling up or my dirty floors or school stuff. It will be nice.

We've still been running. We are up to 4 miles now...look out. That may not be much in the grand scheme of things but it is definitely the furthest I have run in about 6-7 years. We usually average about a...I'm actually not going to tell you how fast we go. Because when you tell someone that you ran a half marathon your audience will be one of two types:

Type One: They are just really impressed that you ran a half marathon and are trying to remember exactly how far that is. They couldn't care less how fast you ran it because they are now busy thinking about the last time that they worked out and how long ago it was. They then occupy their thoughts not with you running a marathon but could they actually do it themselves...
Type Two: You tell them you ran a half marathon and they want to know: what did you average per mile? how many times did you walk? do you walk while you are drinking water? what kind of energy gel did you use? how many races did you run to prepare for the half? And you want to know what I have to say to these people? I WAS BEHIND YOU... the whole time. I am slower than you are so don't ask. And probably, you already know that I am slower than you and you are only asking so that you can feel good about yourself when I tell you my speed.

Anywho...we got a bed recently. We still have the same bedroom furniture that I used when I was 13 but we splurged and got a new bed. 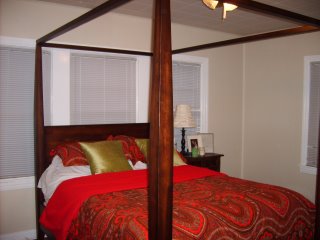 It Could Happen To You...Actually No

No it couldn't. It could only happen to us. The "it" I am referring to happened the other day. I came home from work and the sugar container was out on the counter.

Let me describe sugar container...nice ceramic thing from Pier 1. Has a cute little lid that I left off while making some tea.

I noticed the container because it was scooted to the edge of the counter...not it's usual home so I looked inside. Here is what I saw: 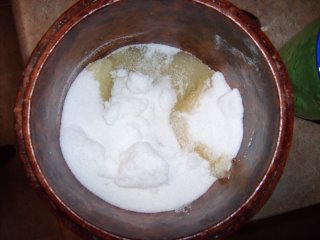 Carmelized sugar. "Weird..." I thought. I wonder how it got all wet. Maybe it has been like that for awhile and I hadn't noticed. I had just been getting the sugar off the top and hadn't seen that it had hardened into a brick like structure.

Forgot about it. Got in bed. 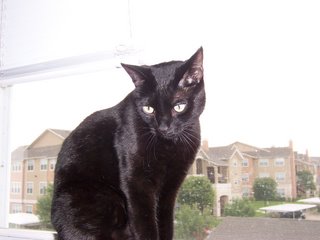 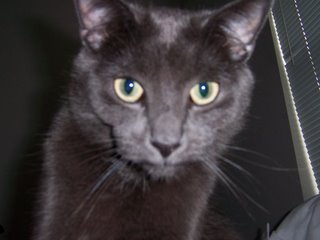 The Crime: Peeing in the sugar container.

We went camping this weekend with Aaron and Andrea in Atlanta State Park. Aaron was Ryan's good friend from ACU and right now he and his wife (who is from Nicaragua) live in Searcy while he finishes school. We had a great time hiking, hanging out by the camp fire and eating...lots of eating! Anywho...here are some pics. I have a great story that I am going to post tomorrow. Hate to leave you hanging...but that's how I roll. 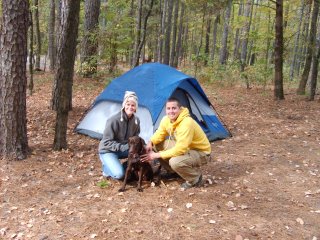 Me, Ryan and Lola in front of our tent. Do you like my sweet hat? 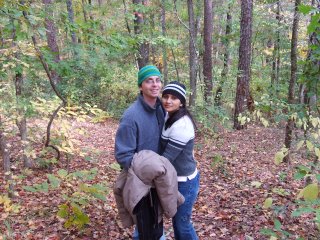 Aaron and Andrea on the trail. 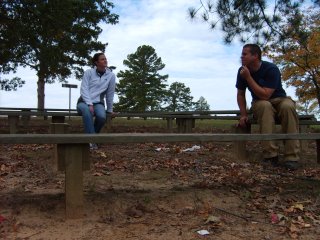 Me and Ryan trying out the timer action on our camera. This is a random "ampitheater" near our campsite.

Mere Ware
I am a wife of the best husband. A mom to the cutest kid. A relative of the amazingest family. A friend of the most fabulous friends. A teacher of the craziest students. And a follower of the greatest God.